I’m talking about a wife as in someone who is there to support you, inspire you and be there for you in sickness and in health.

Women: Don’t you wish you had a wife? Well now you can and you don’t have to be gay to have one! 😉 (But if you are gay, that’s okay too.)

All you have to do is join the online group called A Band of Wives (ABOW) and you are instantly married to a supportive group of wonderful women. Seriously, it is that easy.

A Band of Wives was founded by the amazing Christine Bronstein.

I joined back in February when I discovered them via the Marin Magazine article about online communities that we were both featured in.

At first I didn’t know if this was the right group for me. I was a little intimidated by all the hip, beautiful and successful women. Then I attended a few of their events and realized they were also friendly, genuine, authentic and caring women. You can’t judge a book by it’s cover.

A few weeks ago, I discovered Bistro Burger in San Francisco. I loved their turkey burgers SO much, I went there 3 times that week. They had one of those fishbowls on the counter where you put your business card in for a chance to win a free lunch. I never put my business cards in those things but for some reason I decided to this time. The next day I got an email saying, “Congratulations you won a free lunch for 4 at Bistro Burger”.  I was super happy but was wondering who I was going to invite. I didn’t have 3 friends in the financial district who would be available to lunch. This was about the same time I had the realization that my only real complaint about my job was that I really missed those coffee and lunch dates I used to have in Marin with my Twitter friends when I was self employed.

I remembered super-star wife Leila (@mizbohemia), the Director of Operations at A Band of Wives, lived in the city, so I invited her to join me for the free lunch. She agreed.

Then I got the idea to ask on Twitter who works/lives in downtown San Francisco and I got a response from someone who just happened to also be a member of ABOW! Shasta (@girlfrndcircles), owner of GirlFriendCircles.com and I invited her to join us for lunch. She said yes! We had room for one more at lunch so Shasta invited Jessica (@50womenproject), author the 50 Woman Project and she said Yes!

On Friday, we all met at Bistro Burger (in Trinity Alley) and were greeted by John who congratulated us and took our photo. I’m guessing the photo is going to show up on their Website under the Happy Winner section soon.  Bistro Burger sells veggie, turkey, chicken and regular hamburgers along with salads so there is something for everyone. And they’re really, really good! You can order your burger without a bun if you’re doing the Sugar Divorce, like I am. They’re also on Twitter at: @BistroBurgerSF

It was a nice day so we sat outside. Our little lunch turned in to a 3 hour magical, brainstorming session.  We ended our lunch full of ideas and inspirations for our own various projects. It’s amazing how the power of group intelligence can get you unstuck from a rut. That’s what A Band of Wives is all about; connecting women, and igniting the spark in all of us.

Thank you Twitter, Bistro Burger and A Band of Wives for connecting us!

Here are the 3 dynamic wives I had the pleasure of dining with: 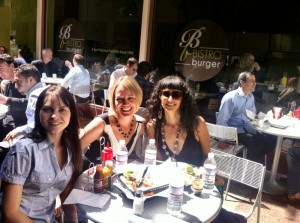 I told you they were all hip, beautiful and successful!