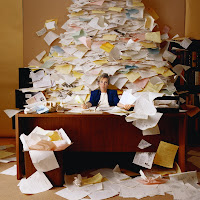 Seems Jaime Lee Mann and I woke up with the same feeling today… the feeling of being overwhelmed by the amount of emails in our in box.

Before turning on the computer today I pulled out the book Getting Things Done: The Art of Stress-Free Productivity

by David Allen to re-read. It’s a great system that I usually follow. Somewhere along the line I dropped the ball and things started piling up. Maybe it was when I was sick in December, maybe it was my vacation in January, maybe it was I’ve been so super busy I forgot to take my own advice and plan my day. Whatever it was… my email in box and my actual in box on my desk were overflowing.

After turning my computer on today, the first thing I did was open my in box and blast through it. Just like Jaime, I sorted by who the emails were from and was able to quickly get through them. For the most part everything that was left in my in box was something that could have been taken care of in 2 minutes or less.

The 2-Minute Rule is one of my favorite GTD tips from David Allen. If you can do it in less than 2 minutes then just do it! Considering I had let 68 emails pile up in my in box (the kind that would have taken 2 minutes or less to deal with) I just doubled or tripled my time spent on emails because I read them when they originally arrived, decided to deal with them later, occasionally scanned them over the last few weeks, then re-read them today and finally dealt with them. Instead of the 2 minutes that I could have taken as the original emails arrived I probably spent over 3 hours dealing with those 68 emails instead of 1 hour or less if I would have just dealt with them when they arrived.

How do you manage your emails?

Like Nike says, “Just Do It!” (Like David Allen says – Do it, Delete it or Delegate it).