After walking around Chinatown for a few hours we decided we wanted to try some authentic Dim Sum. But I wanted to make sure it was good. I’ve had some not so good Dim Sum in Chinatown before. Celia got the fabulous idea to ask the local San Francisco Chinatown police where they like to eat lunch. 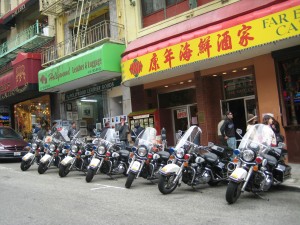 One officer suggested his favorite place to eat in chinatown. He described it as a hole-in-the-wall-tiny-but-wonderful place about two blocks away. He pointed us in the right direction and off we went.

He was not kidding about the hole-in-the-wall-tiny and I was starting  to wonder about the “wonderful” part of his description. 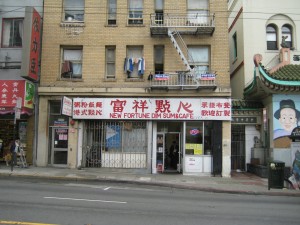 I was a little hesitant at first, I mean I thought the building might collapse on me but Celia and her cousin were already inside practically drooling so I said “what the heck?” and joined them.

The place was tiny! It had only two tables and one woman preparing the Dim Sum. 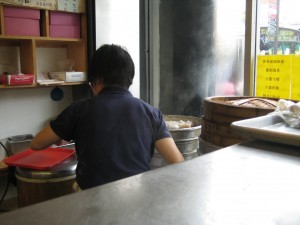 I ordered the Shrimp Dim Sum. Celia and her cousins were more brave and ordered some other things (not sure what) I think pork and something else. 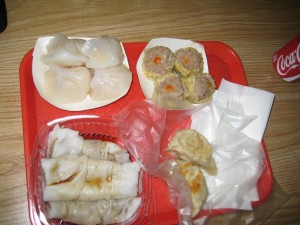 Well, it was the BEST dim sum I have ever had in my life! I even ordered a second order of Shrimp Dim Sum. We all loved it! The four of us ate for under $10 total (including one .80 cent can of coke). You really can’t beat this deal in San Francisco.