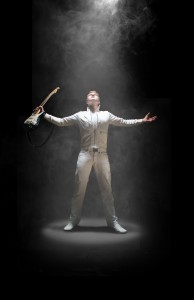 I’m going to the theatre! The Bay Area offers endless entertainment opportunities. If you like the theatre you have come to the right place. If you are looking for a blast from the past, how about seeing the rock music spectacular The Who’s Tommy? Tommy is based on The Who’s acclaimed 1969 concept album, now celebrating it’s 40th anniversary. I’m going to see Tommy in a few weeks and I’m totally excited because I haven’t been to the theatre in quite awhile! Plus, I heard there was a really cute actor named Alex Rodriquez in it that I “just have got to see”!.
😉

Do you remember these songs?
Acid Queen
Pinball Wizard
I Believe In My Own Eyes
I’m Free

This Tony award-winning musical runs October 16-November 7, 2009, at The Victoria Theatre in San Francisco, home of the company’s wildly successful and critically recognized productions of The Rocky Horror Show in 2008, as well as Bat Boy: The Musical in 2005.

For more information about showtimes and the cast visit their Website at www.tommysf.com.

Of course, it would be so much cooler if I were driving to the city to see Tommy in a Mini Cooper!