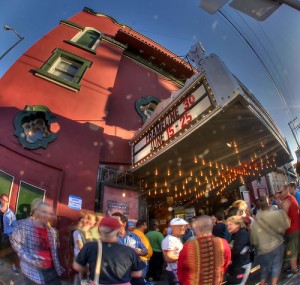 Last night I saw The Who’s Tommy at The Victoria theater in San Francisco. The show was awesome! The quality of the singers, dancers and musicians was top notch. The boy who played 4 year old Tommy was adorable! (But I kept thinking isn’t it past his bedtime?) 😉 The sound engineers were incredible.

Tonight is the last night to see Tommy so if you are looking for something fun to do tonight I suggest going to see Tommy! They serve beer and wine at the venue. I had a Belgium White Beer and it was quite tasty.

After the play was over we hung out for a bit and I got to meet one of the actors (I met on Twitter), Alex Rodriquez who is an amazing dancer and singer with a beautiful smile. Alex has so much energy and passion on stage it just makes you smile while watching him. I asked Alex if he’d be interested in being interviewed on Sally Around The Bay and he said yes so we should be hearing from him in the upcoming weeks.  He told me his next project is Rent. 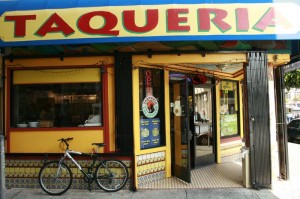 The theater is located in The Mission District. As we were walking back to our car (which by the way we were wishing was  a Mini Cooper because it would have been SO much easier to park) I decided I was hungry so we stopped at the first Taqueria we found open: Los Coyotes Taqueria. I ordered 2 fish tacos ($2.99 each) and think they may be the best fish tacos I’ve ever had in my life! Celia had a baby burrito. We liked how they offered different sizes of burritos. She said it was tasty. The tacos and the burrito hit the spot. If you like Mexican food then the Mission District in San Francisco is the place to go. There are endless Taquerias to try.