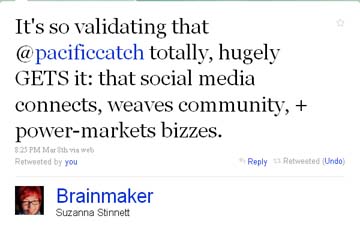 I have to say I totally agree with @BrainMaker. I want to do a shout out to Pacific Catch because they really GET social networking and what it is all about.

This shout out is not because they are on Twitter, although I do send them kudos for being on Twitter but it is because they GET Twitter. They understand what it is about. They understand it is not just about shouting and broadcasting to the world. Pacific Catch understands Twitter is about building relationships, it’s about their community. Pacific Catch participates in the conversation. They connect with their community.

Pacific Catch also knows how to throw a party! They hosted 2 TweetUps this week: one in Marin and one in San Francisco. I was one of the lucky people to attend the Pacific Catch Marin TweetUp on Monday night. Pacific Catch was so generous with us, they kept bringing out tasty appetizers and I’m not talking about chips and salsa, they brought out things like Hawaiian Poke, Ceviche and Thai Coconut Shrimp!

I just wanted to say Thank You to Pacific Catch. You guys are awesome and I think I speak for all the Marin TweetUp crowd – we’d be happy to have a TweetUp at your business any day!

It’s not just Twitter Pacific Catch gets, they get the whole social networking thing. They even have a blog!

We are a silly group but we do appreciate businesses that get social media and we will support you!

A special shout out to Chamin for all your support and always making us feel so welcome and to Amanda (aka @sexythinker) who I have a feeling has a lot to do with all of this.

2 thoughts on “Thank You Pacific Catch”