We had another TweetUp lunch at Thai Smile today (long story why we went to Thai Smile twice in a row but hey it’s good and cheap… $10 each).  I had the Pad See–ew Stir-fried flat-rice noodles with Chinese broccoli in garlic bean sauce. Yummy! (Thank you @WhatsCooking for the suggestion!)

We had a new guest man today: Mike Wolpert. We met Mike thanks to FourSquare. Peggy & Hannah have been competing to be Mayor of Café Gratitude and for quite some time have been stealing the mayorship back and forth from each other and then out of nowhere last week this guy named Mike Wolpert steps in and takes over mayorship. The Marin Ladies of Twitter Who Tweet & Like to Eat while checking in at FourSquare were up in arms that their mayorship had been taken by this stranger! So we did what we do best and stalked him on Twitter. 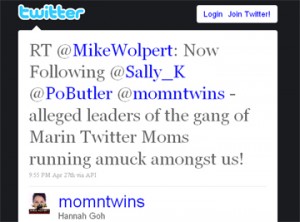 So today the People Who Tweet & Like to Eat met at Thai Smile again but it was a semi-different crowd this time. We had @PoButler, @Fun_Master, @MomnTwins, @Sally_K, @WorkFromWithin, @DianeFischler, @WhatsCooking, @MikeWolpert and a non-Tweeting friend of Hannah & Peggy named Becky who @momntwins (Hannah) tricked in to coming (I think she is trying to convert her in to being a Twitter addict).  Becky was nice enough to take this photo of us! 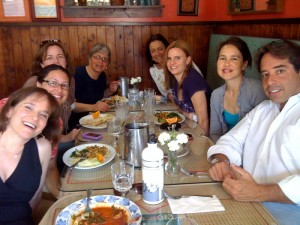