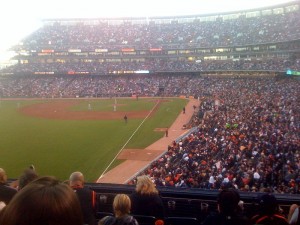 I started a job 2 weeks ago (a real life in an office kind of job) so I haven’t had as much time to blog. However, I’ve still been sallying around the bay.

Yesterday, I went to a Giants game at AT&T park. I hadn’t been to a baseball game in years so this was quite an adventure for me. This wasn’t just any baseball game either this was a special occasion. This game was in honor of our friend and neighbor John Houston who passed away in March. He wanted all of his friends to remember him by going to a Giant’s game. His sister honored his wishes and organized a group of us to go sit at club level and remember John.

We started out by taking the Larkspur ferry to the game. If you live in Marin this is the best way to get to the games. It’s also the most fun way! Golden Gate Ferry has a special ferry designated for the game that drops you off right at the stadium. Everyone on the ferry is going to the game so you can imagine what a party it is to be on that ferry.

All of John’s Marin friends rode the ferry together and then we met up with his sister and others outside of the stadium. Before entering the stadium we had a small ceremony for John right by the water and said our goodbyes. His sister read a beautiful poem written by a friend. We all took a few moments to remember John and then we headed in to the stadium. It was a beautiful way to say goodbye.

We had great seats in the Club area. I’m not very versed in Baseball seating but this meant we were in a place that was less crowded, meaning easier access to the restrooms, food and beer! It’s been years since I’ve been to a game so I was pleasantly surprised to find good food and beer choices. I was thinking we were going to be stuck with Budweiser and hot dogs. Instead, I had a Blue Moon Belgian White and tasty Gilroy Garlic Fries!

Unfortunately the SF Giants did not win last night but it was still a great experience being there with all of John’s friends, remembering him, while doing something he loved.