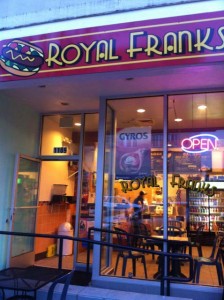 Want to have a delicious and ethnic meal for 2 for under $10? I found the place!

I just discovered today that Royal Franks in downtown San Rafael is so much MORE than a hot dog stand.

I’ve walked by this place many times and never even considered going in. (I’m not a big fan of hot dogs.) Today as we were walking by we a saw a friend (Tere– the amazing woman who cuts our hair in Marin for $10) standing in front of Royal Franks. She was waiting for a friend but told us we absolutely had to try the Pupusas. I was like, “what are you talking about this a hot dog place?” She insisted we try their Pupusas and ordered one for us.

I asked the man behind the counter, Junior (who I think is the owner) what was up, did he have some kind of secret menu or something? I pointed to the menu that listed hot dogs and other random typical American food. He smiled and said yes and then handed me a card announcing the new menu. The card said, “Royal Franks now serves authentic Salvadorian and Guatemalan Food”.

We sat down and had to wait a few minutes. It turns out he makes the Pupusas fresh as you wait.

He brought us the Pupusa steaming hot! It was SO good and authentic tasting.

We decided to have Pupusas for dinner. They’re served with a tomato sauce and a cabbage salad. The total price for Celia and I to eat and bring home leftovers was under $10. The food was fresh, authentic and delicious!

In case you are wondering what Papusas are… here is how Wikipedia describes them:

A pupusa (from Pipil pupusawa) is a traditional Salvadoran dish made of thick, hand-made corn tortilla (made using masa de maíz, a maize flour dough used in Latin American cuisine) that is filled with a blend of the following: cheese (queso) (usually a soft cheese called Quesillo found in all Central America), cooked pork meat ground to a paste consistency (called chicharrón, not to be confused with fried pork rind, which is also known as chicharrón in some other countries), ), refried beans (frijoles refritos), or queso con loroco (loroco is a vine flower bud from Central America). The two most common pupusas are the pupusa de queso (cheese) and more popular pupusa revuelta with mixed ingredients of queso (cheese), frijoles (beans),[1] and chicharrón. Pupusas are typically served with curtido (lightly fermented cabbage slaw with red chilies and vinegar) and a watery tomato salsa. – http://en.wikipedia.org/wiki/Pupusa

I had the bean and cheese Pupusa! 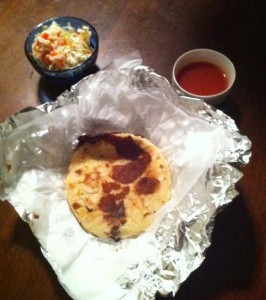 If you go to Royal Franks, ask for Junior and tell him you want to try the secret menu Sally told you about. 😉