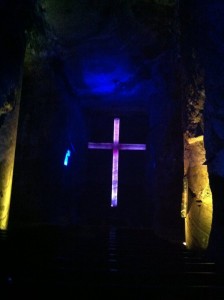 I took a vacation away from the Bay. I just got back from Colombia!

Yes Colombia in South America! The one many of you associate with drugs and spell ColUmbia. Spelling ColUmbia with “U” instead of “O” annoys Colombians in the same way that calling San Francisco “Frisco” drives Bay Area people crazy.

Our trip was short and wonderful (except for the American Airlines return flight home that had an emergency landing, oxygen masks and all – details on this adventure coming soon).

This was a family vacation! Celia, the 3 kids (young adults) and I went together.

When I tell people I went to Colombia the usual response is “Why?!” or “Isn’t that dangerous?”

First let me tell you something, I felt safer walking around downtown Bogotá than I do in some parts of San Francisco.

The reason we chose Colombia was because much of Celia’s family has immigrated from Venezuela to Colombia over the last few years.

Bogotá looked a lot like any big city you see around the world with the difference that there are no lanes drawn on the highway. We complain about our freeways, try driving on one with no lines, pot holes and people passing on the left, right and every which way while honking and trying to avoid hitting motorcycles and bicyclists.

Celia’s cousin and her husband who live in Bogotá were the most gracious hosts! They welcomed us in to their beautiful home and took time to show us around Bogotá.

The first stop was the Catedral de Sal which is an underground Catholic Church that was built in the tunnels of the Salt Mine many years ago. We had free reign to explore the mine/cathedral. It felt like we were in a Disney adventure film wandering around underground discovering new rooms, hallways and treasures. 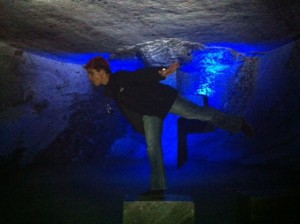 Celia decided to do some yoga while we underground.

To be continued… Celia’s cousins introduced us to 2 amazing restaurants in Bogotá!