Last weekend I got to play tourist around the San Francisco Bay Area. Patty Dost (my virtual friend turned real friend years ago) came to visit from Indiana. Patty has never been to San Francisco before so we had a very packed weekend of activities to cram in to just a few days (because she was also here for work).

Patty said she wanted to see all the “typical tourist attractions” so I did my best to show them to her. 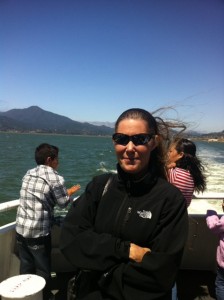 We started out on Saturday evening with a drive from the airport through the city. We passed through City Hall, Chinatown, the Financial District, drove through North Beach, the Marina and finally over the Golden Gate Bridge. She got to witness some of our micro-climates withing her first hour of visiting. It went from clear and sunny at SFO airport to foggy and cold near the Bridge. 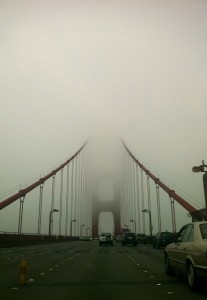 On Sunday, I took her for the full tourist adventure. We started out on the Larkspur to San Francisco Ferry passing two very famous prisons (San Quinton and of course, Alcatraz). Having both of those prisons in the Bay makes me wonder what kind of ghosts from the past linger around here. 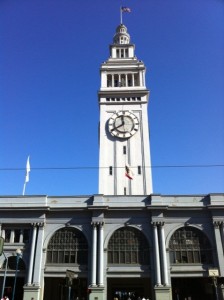 Our ferry landed at the beautiful Embarcadero Ferry Building. We then made our way through the building and out on to Embarcadero where we passed through all the street venders and artist on Market Street. We headed up Sacramento Street (through the Embarcadero Centers toward the Financial District – FiDi). That’s my secret shortcut from the ferry to the Financial District. Patty wanted a hamburger and I knew of a few places in the FiDi area that served hamburgers, what I did not know is that the WHOLE Financial District shuts down on the weekends. It was like a ghost town around here! Nothing was open! Patty was probably thinking, what kind of a big city is this that is closed on Sundays. I used my handy dandy iPhone to search for hamburger restaurants near FiDi… and finally found a place called Murphy’s Pub that was open! Patty got her hamburger! 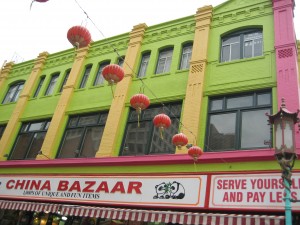 Next we passed through Chinatown where Patty found some fun gifts for her family. After Chinatown I made Patty walk up a short hill that she described as long and steep… she is lucky I didn’t take her to Fillmore Street. #justsayin 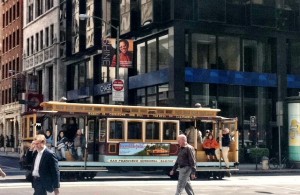 Then we took a Cable Car to Fisherman’s Wharf. Patty could not believe I had never ridden on a Cable Car. I tried to explain to her that only tourists ride on Cable Cars… they are more trouble than they’re worth for locals (at least for me). We rode the very crowded Cable Car, got barked at by the operator – Stand Back! Stay Behind the Line! and held on for our lives as it cruised down hill.

We then hopped off and wandered a bit around Fisherman’s Wharf where Patty purchased some more kitsch. 😉 After that we headed over to Pier 39 to see the Sea Lions and then walk through the middle of the Pier so she could see what all the hype was about. (It’s a fricken mall on a Pier, I personally don’t ‘get’ the hype). I have never in my life seen Pier 39 as crowded as it was this past Sunday! OMG you could not even walk. Picture a bar where you have to squeeze through people to get from here to there… well that is what Pier 39 felt like, so we got out of there as fast as we could.

*This is what it used to be like. For some reason, there are a lot less sea lions at Pier 39 now. Seems they moved to Oregon or something. Lots of Bay Area folks do that, Oregon is more affordable.

At this point we only had about an hour left to get back to the ferry and I was a little concerned with time because there was a Giant’s game that I knew was overflowing on to our ferry because the Giant’s ferry had sold out that day. Patty was tired from all the walking and steep hills of San Francisco so when I saw a PediCab sitting there on the street I grabbed him and asked him for a ride back to the ferry building. Now this is a tourist attraction I always wanted to try. The very strong man peddled us back to the ferry building along the Embarcadero. I think this was my favorite part of the day. 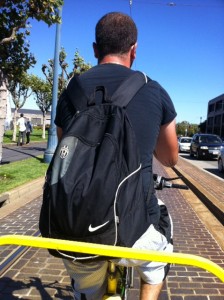 After our ferry arrived in Larkspur we walked across the street to the Marin Brew Co. where I had a planned an impromptu TweetUp and about 10 of my favorite Tweeps showed up to give Patty a real California welcome! 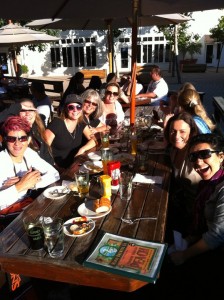 4 thoughts on “Playing Tourist around the Bay”