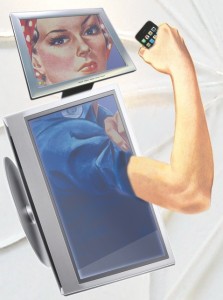 Last week I gathered a group of tweeps together to watch the film Miss Representation. It was a fund raiser for Huckleberry Youth Programs at the Rafael Film Center.

Twenty plus years ago Thelma & Louise and The Accused came out. I was in college at the time and I was angry about the way women were treated but I was happy to see films addressing the issue.

I’m all for focusing on the positive and for individuals being responsible for themselves but I also believe somethings are bigger than the individual and we need to talk about this issue and problem solve it together. However, a pet peeve of mine is people who preach to the choir but never actually do anything, they just talk, complain, blame and finger point. So I’m not going to do that.

Working in the Financial District of San Francisco I often walk by the TV screens with CNBC on. Did you know that people refer to the female reporters on CNBC as the Money Honeys?

I don’t know what the answer is because blaming men is not going to change anything, we already tried that and men are a product of this society just as much as women are.  Blaming individual women isn’t going to work either because if a female news reporter or actress is asked to use a little botox here, show some cleavage there or lose some weigh,t she’s probably going to do it to keep her job. Unless she is Rachel Maddow. 😉

One thing we can do is show our support by paying to see movies: written, directed or produced by strong women, support women in politics, female bloggers, news reporters and companies who advertise with these outlets. In this society money talks faster than anything else!

If we focus on the positive and put more of our dollars in to the positive the media will follow the money and the ratings.

I’d love to start a list of all the great media women (and men) are already doing to bring more balance and happiness to the world. Please list  your favorites in the comments below. Also if you saw the movie I’d love to hear your thoughts.

PS. After the film a group of us pledged to blog our thoughts about the film. I will link to their blog posts below as they are published.

when de ja vu draws the same blank by @Alembic

Women and the Media, Revisited by @CurtisFinancial