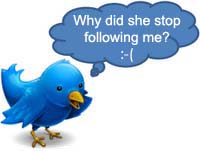 I don’t know about you but I’m feeling a bit overwhelmed with life. In particular I’m feeling overwhelmed with social media. Ever since Google+ arrived on the scene… I have felt pulled in 3 directions. Then Facebook started messing with our privacy to the point where even I’m feeling a bit invaded, and I am not a very private person. I’m barely able to keep up with my @ messages on Twitter which means half the time I miss reading my friends tweets. My DM (direct message) column is filled with unwanted promotional and spammy messages and I sometimes miss real DMs. I even forgot to check my personal email sometimes.

Earlier today I announced on Twitter that I was doing a little Twitter experiment. Well that experiment is that I’m totally going to copy Chris Brogan and do a Great Twitter UnFollow. I’m in the process of unfollowing most of the 5000 people/businesses that I’m currently following and am just keep the handful that I actually interact with.

I used to believe it was rude to not follow back everyone who follows you but that was 2 years ago. I’m now starting to think it is rude to follow everyone who follows you. If you follow everyone it drowns out the people who are most important to you. So, I’m trying this little experiment. Please don’t take it personally if I have unfollowed you. If you start a conversation with me using an @ I’ll most likely follow you back because I’ll know you are a real person interested in real conversations. Many people are on the lists I’ve created so technically I am still following them, but only when I look at my lists.

I know for me personally when I find out someone has unfollowed me it stings a little. Then I remember we’re all busy and everyone needs to make decisions on what information they’re going to allow in to their overcrowded information garden.

Already I’m seeing interesting tweets from people I’d been missing. I look forward to discovering and rediscovering new tweeps now that I can actually see what is going on in my Twitter stream. I’m changing my Tweet stream from the autobahn in Germany to Highway 1 in Marin, making it a little slower and easier to handle.

*disclaimer: I sort of went on an unfollow rampage today so I may have unintentionally unfollowed someone I meant to be following.  I’ve already unfollowed about 2000 people, I will continue my great unfollow over the next week. I’ll let you know in a few weeks if this crazy idea has reduced the feeling of overwhelm or caused more stress. 😉