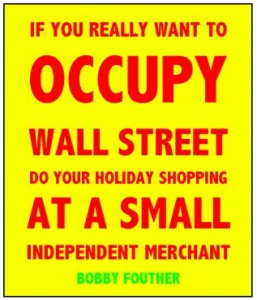 I have been seeing this image circulating around the social networks and it has really stuck with me. I’ve always been a supporter of local, independent businesses but when things get busy and life gets stressful sometimes it’s easier to just go to the nearest Starbucks instead of seeking out an independent, locally owned cafe.

Working in downtown San Francisco you can spin in circles, walk any direction and in less than a block you will most likely find a Starbucks.

I wanted something different. I wanted to get my coffee at an independently owned place but I didn’t know where to go. Until… I opened my eyes and realized there is an Italian style cafe located near my office called Palio Paninoteca. Actually I didn’t open my eyes and look around, I looked down at my iPhone where I was trying out a new program called LevelUp. It’s a program that lets you pay with  your smart phone. I’ve been wanting to try one of those programs for awhile and for some reason this one called my attention enough for me to download the app and try it.

While searching the current locations accepting LevelUp I discovered this cafe just down the street. When I signed up for LevelUp I got $5 credit and noticed Palio Paninoteca offered $2 credit so I decided to head over to Palio Paninoteca to check it out and enjoy my complimentary lunch. I didn’t realize they served lunch in addition to coffee and gelato. Yes I said gelato! 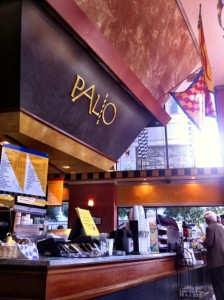 Palio Paninoteca’s lunch consists of soups, salads and sandwiches (paninis) prepared in advance (kind of like going to the counter at Whole Foods). So far I’ve tried 2 of their salads and they are delicious! Today I had the spinach, avocado, mango salad. Yum!

While trying out my LevelUp for the first time I happened to meet the owner of the cafe. She showed me how to pay with my phone. We got to chatting and that is when I learned that Palio Paninoteca is an independent, local, woman owned business. They’re also green and serve your food in reusable ceramic dishes. Bettie Scodel is a single mom and the owner of both Palio Paninotecas. She’s also a very hard worker. She gets up at 3:30am every day to be ready to serve breakfast to the hungry masses passing through.  She proudly told me of her two children in college. She’s the perfect candidate to help me keep up with my Miss Representation pledge of featuring women doing cool things around the Bay Area.

Two thumbs up to Palio Paninoteca and to LevelUp. I had a great experience with both. I’m looking forward to enjoying many more coffee and meals using my LevelUp at Palio Paninoteca.

If you find yourself in downtown San Francisco around breakfast or lunch time give this place a try.

Oh, one more thing! I emailed LevelUp yesterday to see when there were going to be more locations in San Francisco and they said they are adding more everyday! I also told them I would be mentioning them in my blog and they offered my readers a special code! If you want to try LevelUp (it doesn’t cost anything) they will put $10 credit in to your account if you use the code SALLY when registering. When registering be sure to click on the blue link that says: Have a promotion or friend referral code? to get your $10 credit! So go sign up for then let me know and maybe we can meet for a coffee at Palio Paninoteca. 😉

Palio Paninoteca is located on the corner of Montgomery and Clay St in the financial district of San Francisco. They also have a location near UCSF. More info here: www.paliopaninoteca.com

8 thoughts on “Going to Level with You”