When is it going to stop being news that someone is gay?

How come you never see a headline that reads “MITT ROMNEY IS STRAIGHT” or “OBAMA IS IN AN OPPOSITE SEX RELATIONSHIP”. Even now in 2012 when it seems “Hip to Be Gay Friendly”, it is still news. Look what happened a few weeks ago when Anderson Cooper came out of the closet, it was considered news. Sally K. Ride died and what do we all remember about her now? She was a LESBIAN and an astronaut, and a scientist, and…

Here is what Anderson said on why he took so long to formally come out. ‘I want to report the news. I don’t want to be the news.’

Apparently being gay friendly is now the IN thing. 2012 is the year capitalism decided it is hip to be gay friendly (more realistically it is profitable to be gay friendly). While I appreciate all the rainbow colored love coming from the corporations jumping on the big gay band wagon, we all know it is about what sells and if supporting gay marriage will sell more Oreo’s then by golly make rainbow Oreos!*

So what is my point of this rainbow rant or ramble?

Hmmm I am not sure. It just bothers me that Sally K. Ride felt the need to be “private” and stay in the closet. America looked up to her as a hero and she couldn’t even introduce the love of her life to the world. I’m guessing if she had had a husband of 27 years she might not have felt the need to be so private. By the way, her partner of 27 years will not be receiving the survivor benefits to which she is entitled. You can thank Defense of Marriage Act (DOMA). 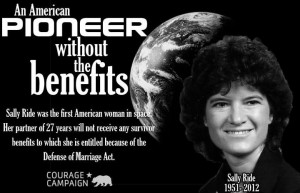 Nobody really knows why Sally stayed in the closet or kept her life “private”. Maybe it was fear. Maybe she wouldn’t have been the first woman in space if she had been out, look what happened to Ellen the first few years after she came out publicly.

As a lesbian myself, I totally understand their feelings. I always prefer for people to get to know me a little before they know I am a lesbian.  Otherwise they usually don’t hear anything I say for the first 20 minutes while they process the broken stereotype in their head that I don’t look like a lesbian (at least, that is the most common response I hear).  Sally K. Ride probably wanted to be known as an astronaut, be a role model for women and girls and not just be known for being a lesbian. Imagine if she had come out. The headlines would have read “Lesbian goes to Space”. Every interview she did would have had questions about her sexuality. It would have just been annoying.

I understand Sally and Anderson. I admire Ellen! Did you know Ellen did not get work for years and Laura Dern did not get another job for a year and half just because she was on Ellen’s Coming Out show?

Ellen’s coming out interview with Oprah in 1997.

Updated 1/16/13 to add a great post in response to Jodie Foster “coming out” at the Golden Globe Awards: Silence of the Gays – why celebrities should come out and speak up! by Josef Church-Woods

*disclaimer: I LOVE OREOS! However, I do my best to keep them out of my house because if there is a package here I will most likely eat the whole thing.