For over 2 years now I have been taking the Golden Gate Transit bus #4 to work every morning. It is early and usually dark when I get to the bus stop. Strangely enough I look forward to my early morning commute and that is because of Ricky, the bus driver! He was always there on time and always greeted me with enthusiasm and a warm smile. 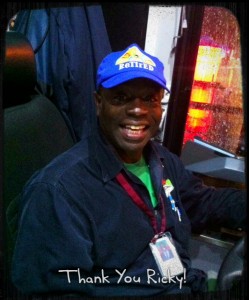 Awhile back GG Transit changed the schedule and Ricky was no longer the driver on my usual bus route. I missed Ricky. The morning commutes just weren’t as fun without him. A few weeks ago a nice woman named Ali came up to me at the bus stop and asked if I had been one of the regular riders on Ricky’s bus. She told me he was retiring and invited me to take his bus on his retirement day. That is when I figured out where Ricky had gone. He’d been driving the earlier bus! The one I never take. The one that left at 6:39am. I’m more of a 6:49 or 7:04am kind of a bus rider.

Today, December 5, 2012 is Ricky’s last day driving the #4. I am going to miss Ricky’s beautiful smile and contagious positive attitude towards life. I am grateful I had the opportunity to be a rider on Ricky’s bus. 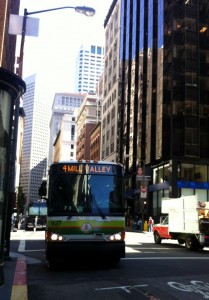 Seems I am not the only one who loves Ricky:
The bus was full of people on this stormy, dark morning who arrived with thank you gifts and well wishes for Ricky.

PS. In all the excitement I left my umbrella on the bus.
I smiled as I walked 2 blocks in the pouring rain to my office and arrived sopping wet.

6 thoughts on “Everybody Loves Ricky”