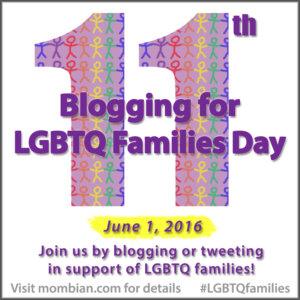 In honor of this day, I decided to take a walk down memory lane and the roller coaster of emotions that come with being ‘out’ online. I believe the Internet is part of what has brought us to where we, the LGBTQ community are today, which is a much better place in society than we were 20 years ago. The Internet has allowed us to connect with each other and to learn from each other. So on this 11th anniversary of blogging for LGBTQ families, I encourage everyone to keep sharing their stories.

Being in a same-sex relationship in the 1990s and early 2000s and living in San Francisco placed us in the center of the marriage equality movement. We were always out about our relationship because we believed, as parents, it was important to be honest and tell the truth. How could we raise children to be honest, proud human beings if we lied about our relationship to society? Here in San Francisco, the main risk of being out of the closet was other people’s judgments and ignorant and hurtful remarks. You learn to grow a thick skin and a sense of humor. Even though we were living in the Bay Area—one of the more accepting places to be if you were part of an LGBTQ family, the greater society still had a long way to go until our family was a fully accepted one. The first year we were together, President Clinton signed the Defense of Marriage Act, defining marriage between one man and one woman.  Hospital-visitation rights to same-sex couples weren’t even a right yet. It wasn’t until 1999 that California established a domestic-partnership registry and hospital-visitation rights to same-sex couples were granted.

Having marriage equality be the forefront of the political arena seemed to give people free license to be blatantly bigoted. There were days when I looked at my Facebook feed and cried. In the name of religion, free speech, and protecting the sanctity of marriage, people whom I considered friends and family deeply hurt me with their comments and posts. People posted images about protecting children from the indoctrination of the homosexual lifestyle or liked posts on James Dobson’s Focus on the Family, a blatantly anti-gay organization that believes homosexuality is a disorder and gay people are immoral. I saw people liking anti-gay statements by Dr. Laura  Schlessinger (if you are gay, it is a biological error) and supporting organizations that believed in Praying away the Gay, while ignoring the fact that the suicide rate among gay teenagers was way higher than other teenagers. When people posted or said things like love the sinner, hate the sin, I was absolutely infuriated, thinking of all the scared and lonely LGBTQ teenagers and others in the world reading statements like this. I also realized that some of my own friends and family thought I was a pervert and a sinner because of my relationship. Did they believe my whole loving, committed relationship and family was a sin? One woman even said to us, if you could just be roommates and not partners it would be fine.

Like Ellen, I didn’t have any intention of being a gay activist. However, being out since the 90s and being gay made me an activist by default. It also turned me in to a teacher. I’ve learned over the years that being out, being kind, and being honest has opened the minds and hearts of a lot of people who thought being gay was wrong, a sin, or something disgusting. Not that it’s easy, but it is nice to be able to enact change, at least on a personal level.

I also learned that honesty can cause me to change my own way of thinking. I remember when I decided to come out to the virtual community in 2006 (before we were all on Facebook and Twitter). I was in a small online business networking group. The group consisted of women from all over the US and a few from other countries. There was a Getting To Know You thread where we all shared things like our age, our marital status, how many kids we had, where we lived, etc. Many of the women in this group were proud Christians—the kind who bring up the words Jesus or the Lord randomly in conversations that have nothing to do with what you were talking about. The kind of people living in the south who had never met a gay person before. To say the least I was pretty much terrified when I saw that introductory thread. I was tempted to ignore the thread but that would have stood out because there were less than 50 people in the group. I could have left the group. I could have answered the questions in a roundabout way. But I wanted to be honest. It was going to be my first time coming out online. Heart racing, I typed up my answers: 3 kids, live in California, blah blah blah . . . When I got to the married question, I put something like my partner is a woman, and we have been together for X number of years. My hands trembled as I hit send. I even cried a few tears because I loved this group of women, and I was afraid I was going to lose them. (Reality check here: THIS WAS ONLY 10 YEARS AGO.)

But what happened next was astounding. Women started sending me private messages telling me they thought I was brave, saying they had never met a gay person but always wanted to, saying their parents hated gay people but they didn’t. Others told me about their sisters, brothers, cousins, and even moms who were gay. What I realized is that what people really want is honesty. They want to be real. They want to feel connected. They want to be accepted. My sharing my story opened a crack for them to share theirs. It was amazing. It was also very healing for me. I got to know some very conservative, Christian women who were more accepting and loving than some of my so called liberal friends. It blew my stereotypes to bits and opened my guarded heart to Christians again. I had been so deeply hurt by Christians in my family and society who had said hurtful things that I had built a wall around my heart and decided all Christians were bad. It wasn’t until I met these amazing women that I had a change of heart. I will forever be grateful to that small online networking group.