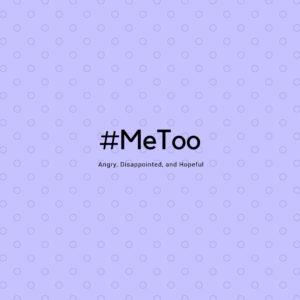 I was going to tweet my top 10 #metoo list, as in the first 10 #metoo incidents I experienced (the ones I could remember). I wrote them out on a piece of paper, it took less than 5 minutes. But then I thought, why? I’m not famous. Nobody is going to listen to me and what is the point of sharing my vulnerability with the world? Is it going to change anything? Does anybody care? Fuck all the lurkers that will read it and not even acknowledge my tweets.

Then I got angry. Angry because it took me less than 5 minutes to come up with 10 incidents. Angry that I had to attend a self-defense workshop in college to avoid getting raped instead of my co-ed’s having to attend a workshop on how not to rape.

Angry that one of the top reasons I chose the university I did was because it had a lower rate of rapes on campus than the other universities I was considering. How many of my guy friends had to think about that when choosing which college to go to?!

Angry because women of color and white women who are not famous have been saying #metoo for years and NOTHING has changed!

Angry because the majority of my male friends are either being defensive or silent about the whole #metoo thing. Dudes, it’s not that hard to say, I’m sorry that happened to you.

Angry because we have a president who has been accused of sexual assault, denies it, and who said, “grab em by the pussy”.

Back in October when the whole #metoo thing started trending I posted a rant on Facebook and noticed the few men friends who left comments reacted in the following ways:

Those comments sent me spiraling down a path of huge disappointment in my guy friends, the good guys that didn’t get-it-at-all, they didn’t get what I was trying to express, they didn’t get how upsetting and triggering these #metoo stories were for so many us women (and men who have been abused). I was sad, I posted a comment letting them know I was disappointed.

And then in the sea of almost every post on my timeline being another woman’s traumatic and triggering #metoo story, one of my guy friends posted this:

To my friends who have posted #metoo and all those who carry the scars from being sexually harassed, sexually violated/assaulted, you have my support. There’s been so many stories told in recent days that have caused many to re-live events of the past. There’s a lot of pain and suffering out there right now – we all have a responsibility to act against predatory behavior.

I read that and I cried. I felt a huge sense of relief. I was amazed how having just one guy acknowledge what I was going through made me feel seen and heard. I cried some more. Thank you to that one guy, you know who you are. The rest of you, I encourage you to copy/paste that statement or write your own. You have no idea how healing it can be to one of your women friends, if you genuinely mean it.

The #metoo movement has been an emotional roller coaster for me. I cycle between anger, disappointment, rage, and hope. I am hopeful that we have reached a tipping point. I am hopeful because at least some of the men who are predators are now facing consequences. I am hopeful that men are now aware of what the reality of women is (all women including poor women, transwomen, and women of color!). I am hopeful that we will soon be able to have a dialog about this and maybe advance as a society.

I leave you with this SNL skit that really resonated with me.