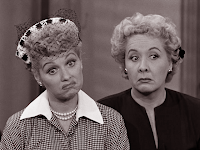 I think Twitter is such a sensation because people want to be listened to – they want to be heard. I often hear people say, “I don’t understand Twitter nobody cares if I’m going to the grocery store or taking a shower”.

What these non-tweeting people don’t understand is that some people do care. In today’s society most of us are glued to our computer screens. We don’t pick up the phone as much as we used to because we don’t want to bother the person and sending an email is easier anyway. Neighbors and friends don’t just stop by now they send evites to plan a BBQ one month in advance.

Remember in the show, I Love Lucy how Ethel would stop by Lucy’s everyday just to say hi and ask what she was doing? It seems people don’t have time anymore to ask. I think Twitter is filling that void in our life!

Our friends, family, spouses and neighbors are all so busy they rarely stop to say, “how are you? or what are you doing?”

Many of us on Twitter have found it to be a very gratifying experience connecting us to other people.

I personally get all warm and fuzzy when I announce on Twitter I’m going for a hike with my dog and one of my followers responds saying have a great hike or asks me how the hike was. It feels good to be listened to, heard and acknowledged.

I try to explain to my non-tweeting friends that Twitter is not really about broadcasting yourself. It is more about building relationships. For the most part, my friends don’t get it. Although, I’ve noticed many of them have set up Twitter pages and are lurking still trying to figure out what the point is. If they would just take the leap, jump in and participate in some conversation they might understand.

PS. While I was writing this I tweeted that I was drinking coffee and getting ready for a hike, a Twitter friend @Ribeezie responded before I finished this post. I love my Twitter friends!