I’ve been so busy working and sallying around the bay I haven’t stopped to take the time to blog. Where do I start?

Yesterday, I woke up with a neck spasm and a headache. I just felt out of whack so I called my chiropractor and made an appointment. Wow, I really needed that adjustment. I’m happy to report that I am feeling 100 times better today!

I scheduled my chiropractic appointment right before the open house at BZhive (they’re located within a half a mile of each other in San Rafael) where Patrick Schwerdtfeger was going to be speaking about Social Media. It worked out great. I had my adjustment and was feeling fantastic, ready to meet new people.

BZhive is the new coworking space in Marin County. I was curious about coworking and wanted to check it out. I’d read about the coworking idea in the book, The Whuffie Factor and have been intrigued by it since then.

BZhive is cool! I want to work there. It’s an open office space environment where you can have your own work-desk in an area shared with other entrepreneurs.  The owners Hila and Dan seem to be really friendly and fun people.

The BZhive open house was catered by Sonoma Latina Grill in Novato. I learned their food is local, organic and delicious! The tortillas were homemade. The light and crispy chips were served with a Hominy Hummus, guacamole and super fresh salsa. They serve good, clean, nutritious whole food.  I spent most of my time next to the food table. 😉

<—Here I am (eating) while talking with @fun_master and @quepol (the co-owner of Citizen Space in San Francisco).

After we finished eating the amazingly delicious Sonoma Latina Grill spread we moved in to the open office space area to hear Patrick Schwerdtfeger talk. I was impressed. He knows his stuff and he was a great speaker. (He’s cute too). I learned some new useful tips for social networking that I hadn’t tried before and came home inspired to implement them. Patrick is the author of Webify Your Business. I bought the book and have already read through chapter 12 since I got home last night. If you get a chance to hear Patrick speak don’t miss out on it. It was well worth my time. I stayed after and chatted with Patrick for a bit. He’s real. It was so refreshing to meet someone working in the social media field who is genuine and authentic. He tells it like it is and doesn’t try to put out there that he is better or more knowledgeable than you. 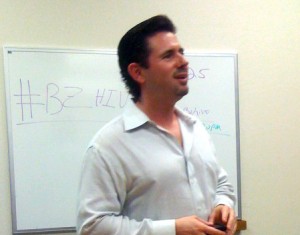 I really enjoyed meeting and listening to Patrick Swerdtfeger. After his talk I went up and asked him if public speaking just came natural to him or if he was in Toastmasters or something. Turns out he is the president of his Toastmaster’s club. I’m the VP of Public Relations for mine. Patrick was a wonderful public speaker. I told him I wanted to be just like him when I grow up (we happen to be the same age).

PS. Thank you to @LeighShev for telling me about this event. And thank you to @fun_master who is always willing to sally around the bay with me and try new things. I don’t know if I would have gone last night if it weren’t for Marilyn agreeing to go with me.

Edited to add Patrick’s mini video from his talk at BZhive:

6 thoughts on “CoWorking and Social Media in San Rafael”