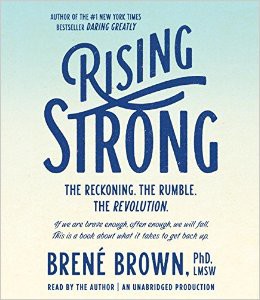 Thanks to Rite Here and Rising Strong , the virtual book group I am a part of, I recently finished reading Brene Brown’s new book titled, Rising Strong. (But I have not finished reading The Luminaries yet for my IRL book club that meets this Wednesday – ooops sorry Betsy.) Rising Strong is about getting up after you have fallen down. Or, putting yourself back out there in the world (a.k.a. the arena) after you have “failed”. One of my favorite speeches of all time is this one from Theodore Roosevelt’s speech. It just happens to be printed on the first page of Brene Brown’s Daring Greatly book:

“It is not the critic who counts; not the man who points out how the strong man stumbles, or where the doer of deeds could have done them better.

The credit belongs to the man [person] who is actually in the arena, whose face is marred by dust and sweat and blood; who strives valiantly; who errs, who comes short again and again,

because there is no effort without error and shortcoming; but who does actually strive to do the deeds; who knows great enthusiasms, the great devotions; who spends himself in a worthy cause;

who at the best knows in the end the triumph of high achievement, and who at the worst, if he fails, at least fails while daring greatly.” – Theodore Roosevelt’s speech ‘Citizenship in the Republic’

I have decided to get back in to the arena and start writing and blogging again. When I finished the first draft of my book all writing ceased. It’s truly a “shitty first draft” as Anne Lamott would call it and I just haven’t been able to bring myself to make it anything else. In fact, I am pretty close to tossing the whole book idea. I wrote it, I needed to write it and it is done. I’m pretty sure I already got my point across through all the blog posts I wrote on the subject so I am not even sure I am going to put the book out there. Maybe I will, maybe I won’t. It is not a big concern of mine at the moment. But, I do miss writing.

I have hundreds of excuses as to why I have not been writing. I won’t bore you with all of them. Instead, I am committing to writing regularly for the next month, right here on this blog. I am stepping back in to the arena.

“Perfectionism is the voice of the oppressor, the enemy of the people. It will keep you cramped and insane your whole life, and it is the main obstacle between you and a shitty first draft. I think perfectionism is based on the obsessive belief that if you run carefully enough, hitting each stepping-stone just right, you won’t have to die. The truth is that you will die anyway and that a lot of people who aren’t even looking at their feet are going to do a whole lot better than you, and have a lot more fun while they’re doing it.” ― Anne Lamott, Bird by Bird: Some Instructions on Writing and Life