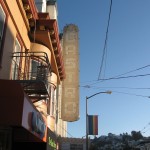 Today I had plans to scope out a new café in the Castro district of San Francisco. Celia’s been dying to try a yoga class at the Yoga Tree in the Castro. She heard great things about. So I agreed to go with her to the city and leave her at yoga while I casually strolled around the Castro in search of a café.

Unfortunately my morning did not go as planned. After I dropped Celia off at yoga, I drove to my bank and went to the ATM to make a deposit and take out some cash. An angry man walked by while I was taking out my cash. He yelled saying I should give him the money I was taking out and started walking toward me. I thought I really don’t want to get mugged. Right then another man called his name and he got distracted. I don’t think he was actually going to do anything but it set the tone for the rest of my morning.

I then drove around for awhile until I found a parking place in the Castro area (not always an easy thing to do). I found a decent parking place, got out of my car and began walking toward Castro Street. It was early in the morning and the streets were pretty empty. About a block ahead of me I saw a small group of young men. One noticed me and started moving toward me. I got a bad vibe from him and decided I’d cross the street and walk on the other side of the street. He then darted across the street and came up right next to me, to the point where he was brushing against me and by the look in his eyes I could tell he was under the influence of something. He started asking me questions and walking with me. I was polite, answered his questions and told him I needed to go.

He said, why, where are you going? I said to meet a friend and then I said goodbye and have a nice day. He didn’t take the hint. He kept walking next to me, asking questions, being too pushy and making me uncomfortable. Too make a long story short I remembered what I learned in a self defense workshop in college (to go in to a place of business if someone is following you or making you uncomfortable).

I saw that Walgreen’s was open so I ducked in there. He grabbed my arm and wanted to know where I was going. I said I have things to do and I want to do them by myself. He followed me in to Walgreen’s asking me why I was so rude and I turned around and said in the firmest voice I could, Stop following me and leave me alone! He said why are you ending our conversation? That’s not very nice. I repeated myself, told him loudly to STOP following me and to go away. The staff in Walgreen’s took note and waited and watched to see what would happen. The guy grumbled, said I wasn’t very nice and went outside. He stood in front of the door of Walgreen’s.

I thought oh great what am I going to do now and I have 2 hours until Celia is done with yoga.  He stayed out front for awhile so I decided what I’d do was go shopping at Walgreen’s and get some of those toiletries I’d been meaning to get. I took my time leisurely walking around while I calmed myself down and made a plan. After awhile I didn’t see him outside the door anymore so I finally got brave enough to face the outside again.

I came out, scanned the area and walked down Castro or up Castro not sure… I was walking toward Market Street. Anyway, I was mad. Mad that because of this man I was not able to relax on a Saturday morning. Mad that this man got into my space and made me uncomfortable. Mad at myself for attracting idiots like this and also thinking to myself that maybe I’ve been living in Marin so long I’m getting soft. Then I thought it’s too bad that we can’t always be soft. It’s too bad that we have to be tough and be on guard.
I turned right on Market Street and saw the café I’d been to a long time ago: Café Flore.   I made it to Café Flore without seeing the guy again so I was starting to feel more relaxed. Café Flore was filled with friendly people that smiled at me when I walked in. I ordered a Chai Tea Latte, found a nice corner seat and installed myself with my book and finally began my relaxing morning.

Café Flore is located at the corner of Market Street and Noe. They have indoor and outdoor seating. Café Flore serves everything from breakfast to dinner. They also serve delicious Sangria that I tried last time I was there in the evening. Café Flore was a great reprieve for me after my somewhat stressful morning.

PS. Celia loved the yoga class at the Yoga Tree and wants to go back.