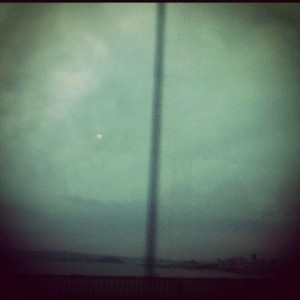 On this dark grey morning at the bus stop, the typical southern Marin white-collar commuters sleepily waited for their bus to pick them up and deliver them safely and comfortably to the financial district of San Francisco.

While we were waiting, a homeless man shuffled up and quietly said “Excuse me may I sit down?” as he made his way through our small crowd to the covered bench.

He sat right next to where I was standing. He smelled like you might imagine a homeless man smells. He opened his can of iced tea and took a sip.

Nobody looked at him, nobody looked up from their phone. I looked at him. He didn’t look back, he just looked down and mumbled to himself. I wanted to say something to him but I didn’t. I wanted to treat him like a fellow human being and ask him if his tea tasted good, but I didn’t. I was scared. I wasn’t sure how he would react. I’ve had some very unpleasant experiences in the past when engaging in conversations with certain homeless people and this has left me with a wall around myself that I do not like but it is a wall of protection. I feel like a jerk but I don’t know how else to take care of myself.

I wonder why he decided to come sit there instead of other chairs nearby away from the crowd. Maybe he was lonely, maybe he wanted some human contact. We weren’t able to or we chose not to give it to him. We just looked down at our phones pretending not to notice him.  For a moment I saw myself through his eyes, I put my phone in my pocket and just stood there next to him trying to be fully present and offer love instead of fear.  I smiled at him as I walked passed him to get on the bus. He mumbled something.

I am thankful my family of origin decided for Christmas instead of buying gifts for each other we will give the  money we would have spent to charity.

Some resources in Marin for homeless people:

4 thoughts on “Have you ever looked at yourself through the eyes of a homeless person?”