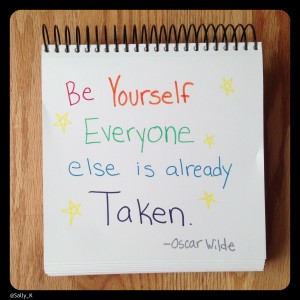 Tip #20: Be yourself; everyone else is already taken. – Oscar Wilde

The upcoming US Supreme Court decisions coming up about Prop 8 and DOMA have reminded me how important it is to speak your truth and be yourself. Thank you to all the supporters of marriage equality who have spoken up.

I have always been “out of the closet” to my friends and family but I did not “come out” publicly online until 2006. I remember the first time I came out online: I was in a small, private, business networking forum made up of about 50 Virtual Assistants. There was a ‘Getting to Know You Thread’ in the forum. This is where everyone introduced themselves and shared a little personal information; things like whether or not you were married, how many kids you had, etc. A large percentage of the women in this group were conservative and very Christian – the kind of Christians that had things like “I love Jesus” in their profiles. The kind of Christians that until recently were very scary to gay people.

So when I saw that thread, I panicked. I considered my options: leaving the group, ignoring the forum or being myself and answering the questions truthfully. I chose to be myself and answer the questions honestly. I remember my hands were literally trembling when I hit the send button, I even cried a little. I did not want to lose this group. They were the most supportive people I had found online and the group was critical to my success as a business owner at the time. Keep in mind this was before the days of mainstream social media. It was still scary to meet people virtually and I had stumbled upon this wonderful group of supportive people.

To my surprise, one by one I started receiving private messages from the members. All of the messages were loving and supportive. Some shared stories of relatives who were gay. Some told me they had been raised to believe gay people were perverts and sinners and that they had never met a gay person before but they liked me and decided they didn’t agree with the way their parents thought about gays. The messages just kept coming in. People shared stories of their siblings and children living in the closet, in places of this country where it was still not safe to be out. They thanked me for having a voice for those who couldn’t. They also taught me that not all Christians are bad and narrow minded. It was not about the Christians and the gays. It wasn’t about them vs. us. It WAS about getting to know each other on a personal level. It is a lot easier to generalize a whole group ie. Democrats vs. Republicans and just write them off than it is to get to know people who think differently than you and let them get to know you.

My tip for today is to Be Yourself – you never know how far reaching that will go. To this day, I still have strangers emailing me and sending me private messages on Facebook and Twitter telling me they are gay or a family member is gay and thanking me for speaking my truth because it has given them strength.

Finally, I wanted to give a shout out to Alan Chambers, the President of Exodus International for being brave and speaking his truth today. I never thought I would be thanking this man.

Did you see the headlines: Exodus International Closes Down

11 thoughts on “Be yourself”